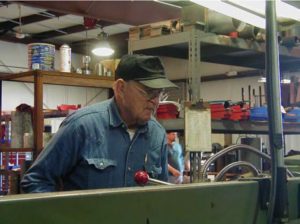 ANGOLA – For three-quarters of his life, Lynn Smith has worked in the machining industry.  Smith was honored by his co-workers Friday June 13th for two reasons:  One, he turned 75 on June 12th: and two, 2003 marks the 50th year he has been a machine operator.  For the last several years, Smith has worked at D.A.S. Services, Inc. in Angola.  He works 24 hours a week.  “I’m a lathe operator,” he said, “one of the last of the breed.”  Barbara Short, vice president and chief financial officer at D.A.S., said Smith is a popular employee at the plant.  “Everyone just loves him,” she said.  Hydraulic and pneumatic cylinders are manufactured at D.A.S., Smith runs an engine lathe.  Smith has seen a lot of changes in his five decades of machining work.  “Mostly the biggest change is the automation,” he said.  “They’re wonderful people,” Smith said of his co-workers.  “They’re like family.”  Smith has worked at D.A.S. “ever since they started … about seven years or so,” he said.  During his career, he has worked at several plants in Ohio, Indiana, Texas and Michigan.  “When things got bad around here … about 1981 … that’s when I went to Texas,” he said.  “I worked in a hydraulic shop there until 1993, when I retired.  Smith took a break to get some “rest and relaxation,” and then returned to Indiana — and work — in 1996.  So why won’t Smith stay retired?  “It’s kind of a long story, but I’ll make it short,” he said.  “While I was working in Ohio, I met a fellow and we became good friends.  When we met, I was fresh out of the Army and had just gotten married.  “Anyway, we worked together for a while.  He decided to retire, and when he did, all he did was sit around in the rocking chair.  And within six months, he was dead.  I swore I was never going to let that happen to me.”  And he still has no plans to retire.  “I’ll work as long as I can,” he said.  Smith is originally from Bryan, Ohio.  He now makes his home in Angola.  He is the father of “three lovely daughters,” Ellen, Gail, and Thrisha, and has six grandsons.  In his spare time, Smith enjoys woodworking and fishing.  “I don’t really have a favorite fishing spot.  I’ll just fish wherever there’s water,” he said with a chuckle.