Skip to content
Home » About Us » News » 10 Year Anniversary Celebration 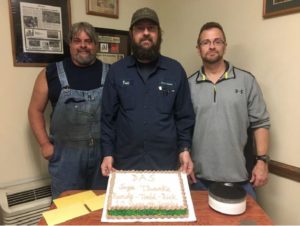 D.A.S. celebrated the 10 year anniversary of three employees with the company.

Todd Crank (center of photo) joined D.A.S. in July 2003, coming to us from Laclede Steel after their plant in Angola re‐located. He has been promoted over the years and is now Plant Superintendent. During his time at D.A.S. he served in both Iraq and Afghanistan as a medic in the Army.

Randy Davis (left in photo) started with D.A.S. in July 2006 initially working in the Inspection Department tearing down and prepping jobs for inspection. He has now been promoted into the Assembly Department as a lead assembler and tester of jobs.

Rick Hinckley (right in photo) joined D.A.S. in May of 2007 after retiring from the military. He served 22 years in both security forces and combat camera for the Air Force. He retired as a Master Sergeant. Rick has work in shipping and receiving, teardown, final prep and parts acquisition over the years. He was promoted into his current position as Inside Sales Associate in 2013.